With this variant, characters can’t be reduced to negative hit points — 0 is the minimum. There is no automatic hit point total at which a character dies. Instead, any character who takes damage that reduces his hit points to 0 must make a Fortitude save (all Fortitude saves mentioned in the Death and Dying section are “Death and Dying” Fortitude saves unless specified otherwise) to avoid falling unconscious or dying. You cannot press your luck on a Death and Dying Fortitude saving throw, regardless of whether you just got knocked to 0 or are at 0 and have to make another Death and Dying save for some reason. Fear effects and stress effects (such as shaken) affect you as-normal if you were conscious immediately before the roll. Worse, while you’re at 0 hit points your reserve points do not function in any way. The amount of lethal damage that brought you to 0 and ever since then is tracked by the GM as your “wounds”. 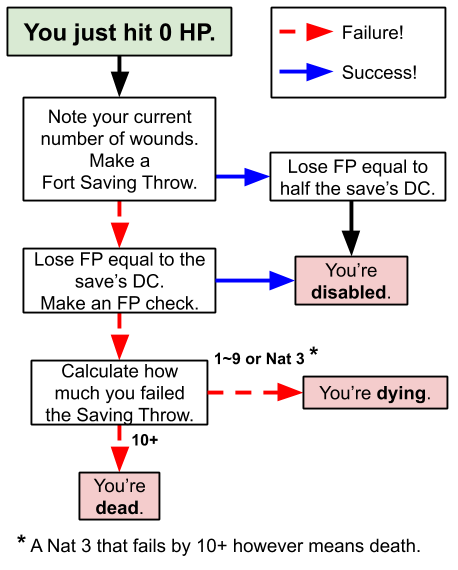 When a creature’s hit points are reduced to 0 by lethal damage, note how much lethal damage brought it to 0. This is added to their current amount of wounds tracked by the GM. The creature must attempt a Fortitude save (DC 10, +1 per 5 wounds). Success means the character is disabled; failure indicates that he is dying. Failure by 10 or more means the character is dead. If the character rolls a natural 3, he is dying. Calculate the numeric result; if he missed the DC by 10 or more, he is dead. NPCs and enemies make the save with a roll instead of using their fortitude score. A quesar or living construct that would gain the dying condition instead becomes inert (as does a quesar that would die). 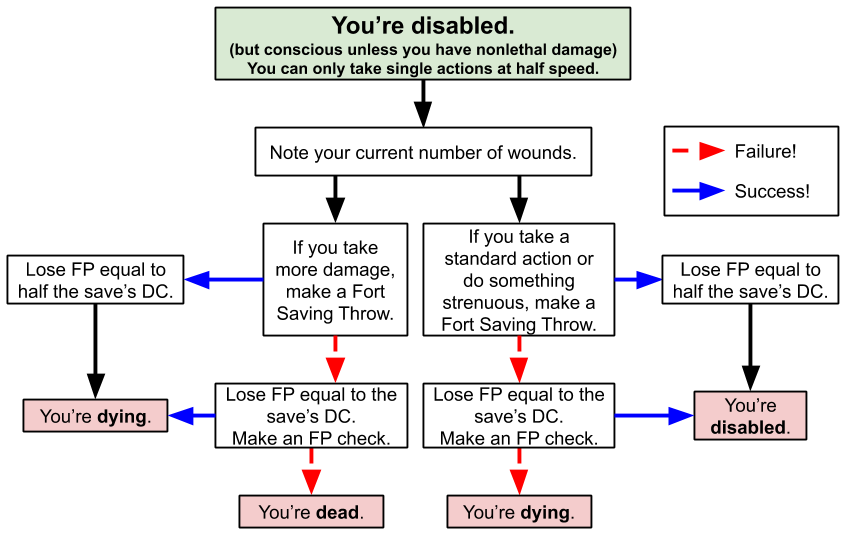 A disabled character is conscious, but can only take a single move or standard action each turn (but not both, nor can she take full-round actions). She moves at half speed. Taking move actions doesn’t risk further injury, but if a disabled character takes any standard action (or any other action the GM deems strenuous, including some free, swift, or immediate actions such as casting a quickened spell) that leaves her at 0 hit points, she must succeed on a Fortitude save (against the same DC as made previously) to remain disabled; otherwise, she becomes dying after she completes the action.

If a disabled character takes any new lethal damage, that is added to their wounds as well, and she must make a new Fortitude save (DC 10, +1 per 5 wounds), but any result other than dead means the character is now dying. A disabled character who is dealt (or who is currently suffering from) any nonlethal damage is unconscious but does not begin dying. A creature with the living construct subtype that becomes disabled is unaffected by strenuous activity, but does still have to make a fortitude save if he takes new lethal damage.

A quesar or a creature with the living construct subtype that would gain the dying condition instead becomes inert. A creature that would otherwise be destroyed at 0 HP is destroyed.

A stable character is unconscious. If a stable character takes any new lethal damage, that damage is added to her wounds and she must make a new Fortitude save (DC 10, +1 per 5 wounds) to remain stable. If the character fails the save, she becomes dying, otherwise she remains stable.

The Fast Healing ability acts differently while you’re at 0 hit points. It first heals any nonlethal damage as normal, but instead of then healing lethal damage it provides a +2 circumstance bonus on The Fortitude Save for every point of fast healing that would heal lethal damage that round.

Unlike the standard massive damage rules and the ones described by the original form of this variant, massive damage doesn’t apply in the usual sense in this setting. If you’re reduced to 0, you can still die outright as a result of failing the fortitude save by 10 or more, but a fortitude save doesn’t automatically trigger if you take 50+ damage and live through it.

Ascendant campaigns can view previous versions of their pages, see what has changed (and who did it), and even restore old versions. It's like having a rewind button for your campaign.

We've already been saving your edits, so if you upgrade now you will have instant access to your previous versions. Plus, you get a 15-day free trial, so there's nothing to lose.