All actions have a declaration and a resolution. Declaration is where all the specifics of the action are stated (spending the action, what the action will do, number of targets, selection of targets, selection of area, any modifications, etc.), and resolution is where any dice are rolled or any other rules for the action are resolved (attack rolls, damage rolls, saving throws, etc.). An action might have multiple sub-steps with their own declarations and resolutions (such as a full attack with multiple attacks and which may change targets between attacks, or a charge which has movement and then an attack), and thus you don’t need to declare all of the specifics of the action when the action is first declared, and you don’t resolve all sub-steps all at once.

As normal, using an immediate action consumes the swift action you would normally have the following round. You can downgrade a standard action to get an extra swift action (regardless of whether you’ve already consumed your original swift action that round). You can’t downgrade a move action to a swift action in this way. Realize that per the Complete Arcane book and the SRD, “quicken” effects are a swift action (instead of a free action, as stated in the Quicken Spell feat description in the Player’s Handbook). 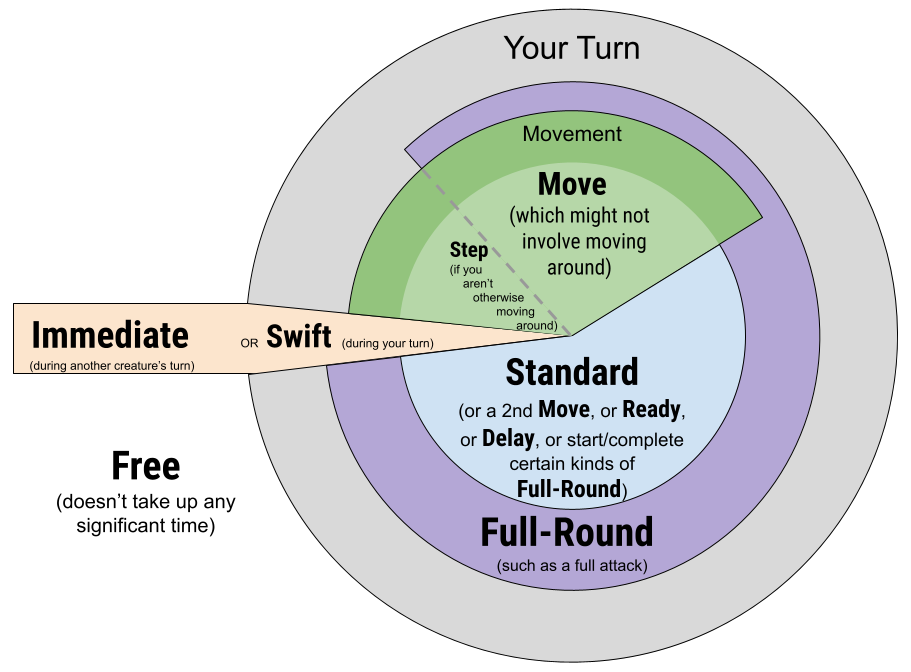 In a surprise round where you are not surprised, because you can take free actions, you can take a swift action (or an immediate action) since those are each essentially a free action with certain restrictions.

All immediate actions (unless the effect specifies otherwise) can be declared either between actions outside of your initiative, or between an action’s declaration and its resolution (or between the declaration of a sub-step and the sub-step’s resolution, if any). For example, if you have the spell wings of cover available to cast, after an attack is declared against you then you can declare that you’re using an immediate action to cast the spell wings of cover . If you do however, your casting must be declared before the attack is resolved (before any attack rolls or damage rolls are made, etc). Likewise, when an enemy is moving in a charge at you, you could not declare that you cast wings of cover while it’s moving (the moving part of a charge is a sub-step), but you can declare such after it’s been declared that the target of the attack is you.

“Activating a spell trigger item takes the same amount of time as the casting time of the spell that the item stores, but activating the item doesn’t provoke attacks of opportunity.“ (This applies to power trigger items as well.)

The same goes for spell completion items. From the same Rules Compendium page:

“Activating a scroll takes the same amount of time as the casting time of the spell stored on the scroll and provokes attacks of opportunity as spellcasting does.” (This applies to power completion items as well.)

Improvements to the 5-foot Step

A “step” allows you to move on your turn even if you do not act to move. For example, you could load a light crossbow (a move action), fire it (a standard action), and also take a “step”. However, I consider the fact that the step normally only allows 5 feet to be really weak, so I’ve made some improvements. Assuming that you haven’t otherwise “moved” yet as part of your other actions on your turn:

Improvements to the Full Attack Action

My goal is to eliminate the need for a “primary hand” term in the full attack rules, as no manufactured weapon (not even a shield bash, armor spikes, or unarmed strike) should be restricted to only being an off-hand weapon. You must declare a “full attack routine” when you make a full attack. You do not have to declare who you will be attacking, just whether you’ll be including any optional attack sequences (see below) and the changes to your BAB for each sequence. Once you’ve determined the set of weapons/penalties for your full attack routine as described below, you do the sequences in-order but you can do the attacks of each sequence in any order or even opt not to use some of those attacks. You can choose a different weapon for an attack after the routine has started, but only if that won’t change any of the routine penalties (for example, you could change out using one light weapon in an off-hand for another light weapon in that same off-hand).

If your routine contains a manufactured weapon:

Improvements to the Ready Action

I want players to be able to surprise me with readied actions. To ready an action, declare that you’re going to ready an action (this consumes a standard action). On a piece of paper, write down the trigger’s description and your specific triggered action, and lay it face down on the table (much like laying a “trap card”). You are not allowed to tell anyone about the contents of your ready action before it’s triggered. When you think your trigger has occurred, reveal the paper. The GM is the final arbiter for whether your trigger activates.

What I mean by that is that nothing in the rules says that you have them dominated. You can give them orders, but the details of how they move or act is up to me as GM. This is especially true for animal companions, and I fully enforce the handle animal rules for tricks and special purposes.

This drastically improves the speed of combat when these extra characters are involved. Other than a basic freeform statement (about the length of a twitter message) as a free action once per round (in plain English) on your initiative, you are not allowed to say anything in-character in combat. If anything I’d say this is the single most basic and obvious fix for the Leadership feat (and associated abilities).

This also counts when using telepathy, as telepathy also moves at the speed of speech. Empathic impulses however, (such as between a wizard and familiar) are faster than speech and don’t have this restriction (but are limited in what they convey).

Actions which imply speech in the process itself do not affect and are not affected by these speech limits. For example:

If you really want to say more, you can spend actions on your initiative:

Sure, this means that you can’t really have character dialogues or monologues in combat, but isn’t monologuing supposed to be a bad idea? This is why the one-round diplomacy check penalty of -10 isn’t just harsh numerically, but in fluff as well.

I also cut down on at-the-table talk by imposing this speaking restriction on the PCs as well. You’re allowed to ask the GM for any information you like about your own perceptions, and you can ask an ally anything informative about them or their abilities that you could have learned from chatting with them around the campfire or on the road, but apart from that, it’s one twitter-message-worth of speech or telepathy per round (in plain English). It’s realistic, it creates tension in combat other than the immediate danger at-hand, and reduces how much the players can act as a hive mind.

It also makes them plan ahead and gain the meta-equivalent of teamwork benefits, and makes the party stick to those plans when it becomes a crisis. If you can’t talk eachother through tactical choices during combat, you should be reasonably expected to follow the previously-agreed-upon plan.