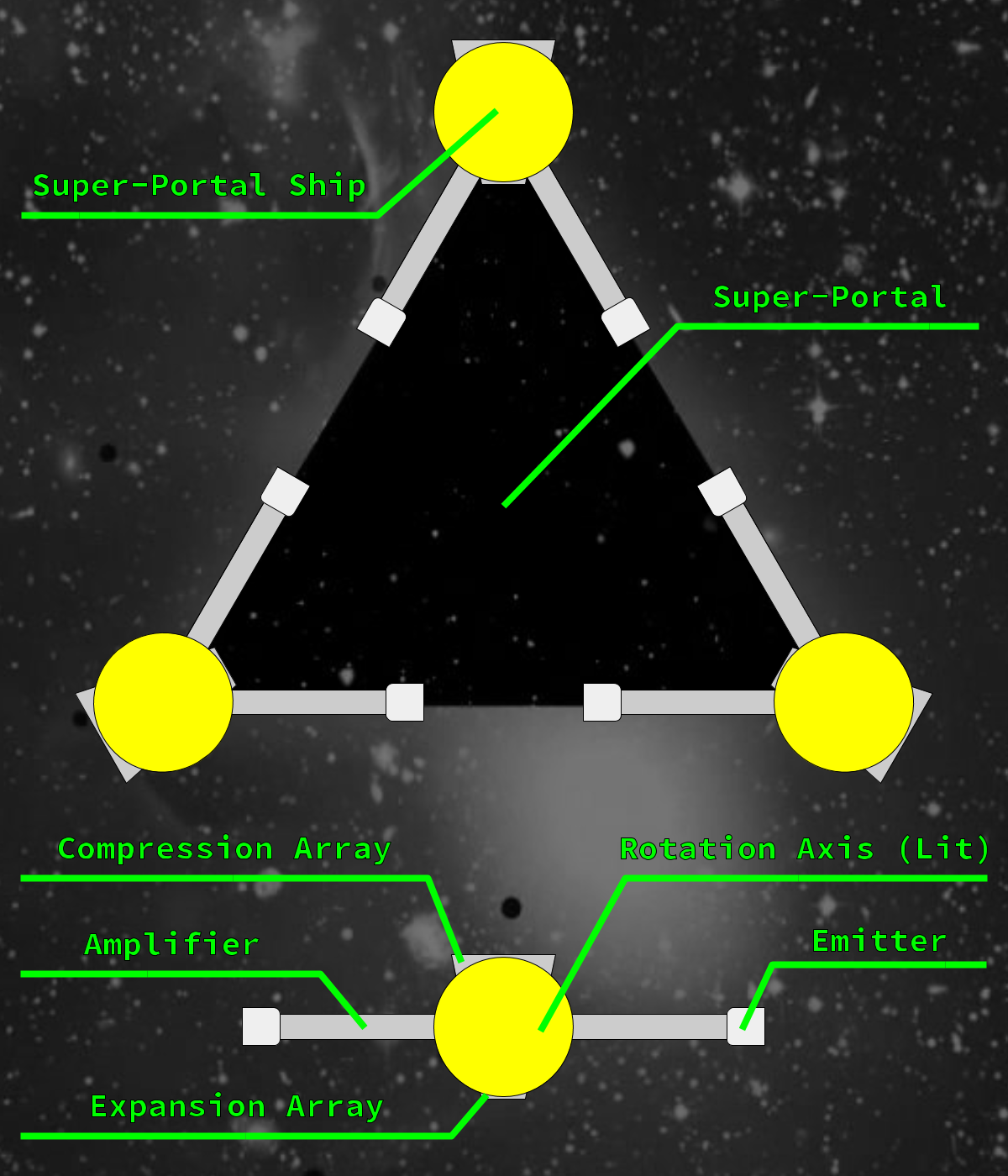 The weave and shadow weave are responsible for the existence of magic, but are also responsible for why stars and planets and galaxies are ultimately able to attract eachother in a gravitational pull.

Spaceships travel great distances by — instead of mucking about in a transitive plane — by folding the ever-present weave and shadow weave (and thereby fold space outright) using a network of Hyperion-built “super-portals”. Super-portals operate on a similar principle to what happens when you push a portable hole half-way through a pair of ring gates. The set-up of this network required that a set of specially-equipped spaceships had to go out there the hard way first (portal ships can move stupid-fast in a straight line) and form a smaller portal so that more could come through, each one making the resulting super-portal more powerful for the next leg of their journey.

Eventually, this gave rise to the “Interstellar Major” starways (the red and blue lines in the map below) which jump between the major star systems along the spiral arms, the “Interstellar Minor” starways (not depicted) which split off to each of the nearby stars in the area, and the “Intra-stellar Majors and Minors” which are in orbit around each major celestial body in a given star system (including space stations). There are almost always several lanes of each type in each star system or in orbit for each destination, for redundancy and reducing traffic. When these things are few or absent, what would be a trip of a few days can take a week or more, especially if one or more of the connecting systems is a hub of interstellar traffic and it takes a while to get all the way to an obscure interstellar gate.

Along most of these starways between each destination and super-portal hub are many sets of communication buoys, relaying messages across the federation and assisting in directing traffic. Every set consists of at least two buoys, and the sets are spread out over 1500-mile intervals, so that if one buoy malfunctions, there’s redundancy and two of the adjacent buoys can begin moving closer to reduce the duration of any potential incoming communications outage. Through these buoys, you can get a recorded message from one end of the federation to the other in a few hours. Additionally, they project illusions which help approaching ships stay on course between super-portals. 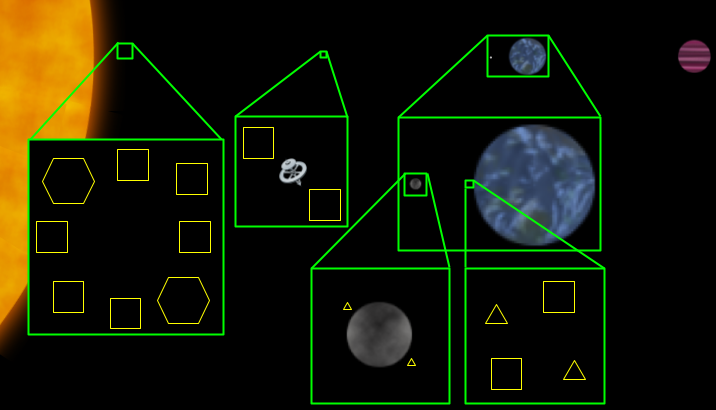 The number of sides for a super-portal indicates how many orders of magnitude of distance are covered. Triangles are between a planet and its moons, squares are between a star and its planets and other major objects, pentagons are for interstellar objects like deep space stations and rogue planets, hexagons are for neighboring stars, and so-on.

Spaceships serve mostly in the same capacity as a boat in most campaigns. Usually, players will not and should not have access to directly control a spaceship, and even when they do, it should generally serve little purpose except for getting their characters from plot location A to plot location B. Combat inside a ship is acceptable, or even combat on the outside surface of a ship using spacesuits, but inter-ship combat is too much of a hassle and can easily ruin a campaign. Combat in a ship that puts the ship itself at risk of destruction should if at-all possible be set up so that no matter what the PCs will live.

Functionally, spaceships are buildings that fly in space. From the outside, they may appear streamlined, but inside they’re structured much like a building (although the visible parts may have some streamlined aesthetics). Spaceships are superdevices and as-such can be upgraded in a variety of ways by finding cubes of magine (for magic spaceships) or psiodine (for psionic spaceships). The nature of these upgrades is up to GM fiat as plot demands (i.e. “I want transporters, so how much do I need for that?”). Removing a cube from a system makes that system inoperable. Most ships store their cubes in the power core and divert power as needed to each system by redirecting the power from each individual cube to its needed system.

The drives that move ships aren’t drives at all and more like tugs. An advanced but highly-specialized telekinetic sphere effect called an IB (“inertial bubble”) forms around a ship (visible as a grid of bright colored lines stretching to a point at the front end of the ship, about 100 ft away from the hull) and its cargo train (if any) and surrounding area, displacing the volume (and the masses in it) entirely from most local inertial reference frames. During take-off and landing, the IB is matched to a single local inertial reference frame, such as a planet or space-dock (but even then that frame’s local gravity is practically negated). While the IB is formed, two artificial gravity wells formed inside the IB: one inside the ship pointing down, and one outside the ship pointing inward along the line of the ship’s center girder. Either of these gravity wells could be potentially disrupted, making the disrupted space have no gravity.

IBs can bump into each other and bounce off harmlessly, because from the perspective outside, it’s as if there’s no mass inside the IBs. While such a bump might look disorienting looking at the instruments on a ship when it happens, no change in momentum is experienced by the mass inside the IB. An IB can even be instantiated around a nearby object with the right kind of ship.

That said, while an IB is great for moving around and mitigating collisions with other IBs and the masses within them, mass can still move through an IB’s edge as normal, and that’s where various defenses protect the ship. The most common type of defense is an “active telekinetic defense” (ATD), where the pilot senses incoming objects through a neural interface and deflects them via great telekinetic hands which form move around inside of the IB. However, the ATD is so heavily specialized to reduce cost that objects not moving with extreme momentum relative to the IB pass right through the hands. More traditional force shields (frequently seen as silver-colored emerald planes ) can also be formed inside of the IB.

(This section is a Work-In-Progress)

Most magical and psionic effects (including guns) don’t care about gravity when calculating their range, but they do have a maximum distance at which the magic can influence reality (usually a maximum of “long” range plus the effect’s radius if it has one, or roughly 500 ft. total). Mass weapons (such as ballista) care about gravity only while they’re in a nearby gravitational field (such as within an IB), but the tug of a ship’s movement abilities or its movement in orbit are usually fast enough (perfect maneuverability) that unless the mass weapon is within its normal listed range the targeted ship will be able to easily move out of the way before it gets there. If that is not the case, mass weapons have effectively an infinite range, traveling 10 times its range increment each full round. Damage is dealt to the hull of a ship normally, although most hulls are made of stone at least 5-ft thick, clearstone at least 5-ft thick, or in many cases 6-inch thick steel plating.

What’s usually more effective and safer in ship-to-ship combat are boarding actions where they get to within 2000 miles of the target, and then teleport crew and equipment to within the IB of the target ship. Then they locate a clearstone window or airlock and teleport inside that.

Using technology similar to a permanent teleportation circle, waypoints are a set of structures in orbit around a planet that act as spaceports and assist in travel between a planet and its closest moon(s). There are anywhere between 1~199 of these waypoints strung out in a straight line between the planet and that moon (only 1~4 if the super-portals for a planet or moon are in low enough orbit to bridge the gap down to less than 2000 miles).

Every pad has marked above it the number of the waypoint that it leads to, and has safety protocols ensuring that no one gets teleported into the vacuum of space or stuck in someplace that’s not publicly-accessible. Because Automatic Pads teleport you directly onto the next pad in the lane, only a split-second seems to pass between stepping onto the pad and arriving at the destination of the ending Manual Pad. By arranging different combinations of these two types of teleportation pads, waypoints thus have four kinds of lanes: