Any time you would roll a 3d6 to reach a target number or opposed roll, immediately prior to the roll you may choose to “press their luck” and change your final static modifier on the roll to a variable equivalent. You must decide on whether to press your luck before making the associated 3d6 roll. You then roll 3d6 and any roll-result-specific events (such as a natural 3 or 18) are noted, roll the variable modifier dice separately (usually after the 3d6 roll, to avoid confusion), and add the result to your 3d6.

Any modifiers to the roll that the player did not know applied to that roll are secretly applied as a static modifier after determining the roll result. For example, some effect might say that a PC takes a -2 penalty on attack rolls. If the player would have no reason to know that’s happening, the GM would secretly apply that -2 static penalty to their attack roll after they roll (even if they pressed their luck).

You can’t choose to press your luck in the following circumstances:

Effectively, for every point of bonus or penalty beyond 1, the “die size” of the variable modifier increases by one step, as shown on the tables below. Starting at a modifier of +11 or -11, the pattern simply repeats every 10 points. Use variable modifiers only when adjusting the roll of a 3d6. Don’t apply them to damage rolls (including those that involve 3d6 somehow), hit point rolls, percentile rolls, or any other roll that does not involve a 3d6.

Sometimes, despite the abstract nature of combat, you’re going to want to apply damage to specific parts of the body, such as when a character’s hands are thrust into flames, when he steps on caltrops, or when he peeks through a hole in the wall and someone shoots an arrow into the hole from the other side. (This situation comes up most frequently with devious traps meant to chop at feet, smash fingers, or the like.)

Called shot damage deducts from any temporary HP before determining how much damage was actually dealt to the body part. (Temporary HP acts similar to damage reduction when against called shot injuries.) Once a specific body part has taken lethal damage, you apply a –2 circumstance penalty to any action that the character undertakes using that portion of his body. For example, if a character’s fingers get slashed, he makes attacks rolls with a weapon in that hand at –2 circumstance penalty and he takes a –2 circumstance penalty on skill checks involving the use of his hands. If a character steps on a caltrop, he takes a –2 penalty on skill checks involving the use of his feet (in addition to the effects described in the Player’s Handbook). Also, these penalties shouldn’t stack — two injuries to the same hand should not impose a –4 penalty. Use Table: Called Shots and Effects for determining the penalties. Attacks to different hands though would have stacked penalties.

A creature with at least two of a body part only has penalties appropriate to what percentage of those body parts have been severely damaged. At one-quarter of them severely damaged, the penalty is -1. At half, the penalty is the normal -2. At three-quarters, -3, and once all of them are affected it’s a maximum of -4 (plus any other special effects as-appropriate such as blindness or deafness).

This penalty lasts until the character heals, either magically (including fast healing or regeneration) or by resting. For a minor wound, such as stepping on a caltrop, a DC 15 Heal check, 1 point of magical healing, or a day of rest removes the penalties. Otherwise, you must remove all lethal damage to heal all of your injuries (temporary HP does not remove lethal damage). On your initiative, you can as a free action choose to “tough through” each of your injuries for the duration of your turn (one attempt per injured area per turn) by succeeding on a Fortitude or Will save (injured creature’s choice of which Save; DC 10 + the damage dealt by the attack). NPCs and enemies make these saves with rolls instead of using their save scores.

A called shot can happen to a location which has already been injured, but only the attack which did the greatest damage to that location affects the “tough through” save DC (of course, they still take both amounts of lethal damage).

You can always give narrative for attacking a body part and dealing damage to it, but if you want those words to have a mechanical effect in-game, you must make a “called shot attack”. Usually called shot attacks do damage which also imposes a penalty, but certain actions (such as the Dirty Trick combat maneuver) are exceptions which only care about how much harder it is to hit a specific body part. The rest of this section describes the general method for called shot attacks.

Once per round on your initiative when you would make an non-touch attack roll that would deal lethal damage against a creature, you can choose to “call a shot” on a particular part of the creature instead of attempting to hit the center of mass. Effects (such as spells) which specifically call out touching a specific part of the target’s body are not inherently called shots, and called shots cannot be used to augment such effects. Calling a shot to a particular body part can only be done against targets that have such a body part and you must have line-of-effect to that body part. For example, while a humanoid almost always has arms, an ooze almost never does. For another example, you can’t make a called shot to someone’s legs when those legs are buried in quicksand.

To make a called shot, first you must specify before your attack roll that you’re making a called shot, what creature you’re calling the shot on, what body part you’re trying to hit, and what weapon you’re using. The target has an “improved AC” value for this attack as appropriate to the body part you’re targeting (see “Table: Called Shots and Effects”). Then you must make an attack roll while pressing your luck. A melee called shot attack within reach of that body part gets a +2 bonus versus this improved AC. If the attack roll hits the original AC but misses the improved AC, it’s a regular hit (not a called hit). If the attack roll hits the improved AC, it’s a called hit and its effect begins immediately.

All coups de grâce can optionally include a called shot without making any rolls.

If the basic 3d6 part of your called shot roll is in your weapon’s critical threat range, use your total attack roll to consult the flowchart below: 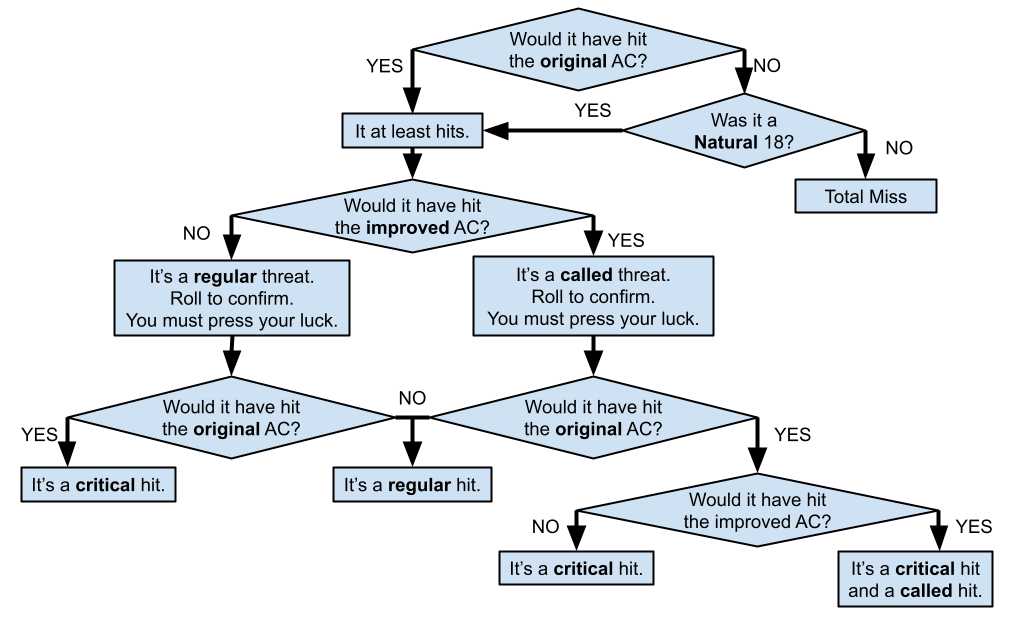 Critical hits can increase the amount of damage applied to a called shot save through their critical multiplier, but otherwise have no effect on called shots.

1 The “improved AC” is based on the size the body part compared to the creature as a whole:

2 In the table, “severe” damage means damage that meets or exceeds the maximum value of the creature’s first hit die. If a body part is larger than half of its size (consult the artwork), the body part is too large for you to make a called shot against it.